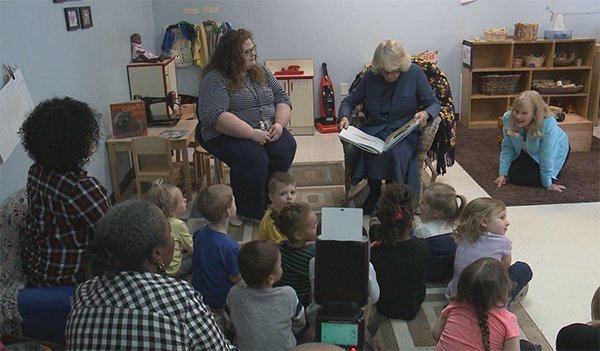 The Royal Duchess of Cornwall made a special trip to Neighborhood House near West 25th Street and Portland Avenue.

The Duchess of Cornwall saw something special in the Neighborhood House: A common goal to keep communities in need not only fed, but educated and empowered.

Long before Duchess of Cornwll Camilla Parker Bowles even stepped off the plane in Louisville, two-year-old Gianna Shomette and her family had been on the lookout.

“I’ve been waiting all morning to take a picture of her,” said Shomette’s aunt, Missy Maggard. “We’re waiting for her to come here.”

From the little ones to those a little more seasoned, no matter who you asked Friday, just about everyone at the Neighborhood House could not wait for the opportunity to meet face-to-face with royalty.

“I’ll ask her do they still have knights or how do you become a knight,” said Neighborhood House patron Jason Logsdon, 11.

Rice said that is why the Duchess chose to visit the Neighborhood House, a community center designed with community sustainability in mind.

In speaking one-on-one with teens like Neighborhood House patron Daylan Sutherland,16, the duchess learned how the center promotes food literacy, intellectual development and a sense of community pride.

“You learn how to grow your own food,” said Sutherland, “everything that’s on a farm.”

“They have homework help,” said Logdson.

With entry into the Neighborhood House requiring a security clearance Friday, many people living in this Portland neighborhood got a glimpse of the royal visit from the sidelines.

Whether on the outside looking in, or inside nibbling with nobility, those that call Portland home valued the visit.

“I think it was a blessing they chose this place, you know,” said neighbor Debra Cisse.

“She could have picked anywhere,” said Richards. “It was just as important to come down here, this part of the neighborhood as it was to go to Churchill Downs and I really appreciate that.”